How Norway’s biggest news site protects itself from DDoS attacks

Every day hackers attack Norway´s largest news site, VG.  But not without risk. VG has both helped the police put hackers behind bars and alerted mothers about what their adventurous sons are up to.

VG.no is one of the most successful news sites in the world. Every week 4 million Norwegians – out of a population of 5 million – visit the site for the latest news.

But that also makes VG.no a target for hackers. “Whenever there is a new security hole discovered, someone want to try it on VG,” says Audun Ytterdal, head of IT operations in VG.

During the Schibsted Tech Polska Winter Event 2016 he presented “War stories from the ops trenches”, describing how the media house protects itself from a continuous flow of DDoS attacks.

Under attack every day

VG is well prepared for hacker attacks – and is able to deal with lots of traffic without going down. According to Ytterdal the site can handle up to 30 GB per second.

In the presentation he explains some of the technical measures taken to secure the news site from attack. But he also tells entertaining stories about how the IT staff used their technical skills to identify the hackers. 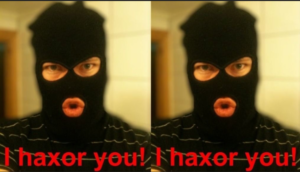 And not always the hackers have everything planned out! Take for instance the young hacker who managed to take over the front page of the business site E24.no with photos of himself in a balaclava taken in his mum´s bathroom.

However smart he had been breaking into the site, he had forgotten to remove the location info added to the image file when he took the photo with his mobile phone.

“So we could see where he lived – and we called his mum informing her that her son was up to activities she may not approve of,”  laughs Audun Ytterdal.

In another case the hackers bragged about their achievement on Twitter. That gave the IT operations department the opportunity to contact them directly.  After a while they also managed to identify two of the hackers. When one of them posted a photo from a town in Southern Norway, VG was able to locate the exact house it had been taken from with use of Google Street View.

The information was given to the police – and the two hackers later had to serve time in jail.

For a news room all alarms go off when the main site is down.  And Audun Ytterdal believes it will be very hard to avoid never being shut down.

So what to do when it happens?

Of course identify and fix the problem.

But VG also decided to give people a good laugh by designing an entertaining error page. The error page is a fun version of the normal front page of the site.

“The last time we used this we had people tweeting that they would rather see the error page of VG than any other news site,” smiles Ytterdal.