A team of attackers shut down several ISIS aka Daesh websites against terrorist attacks in Nice and Middle Eastern countries!

Terrorism has no religion that’s why whenever a terrorist attack is carried out the victims are innocent people irrespective of race or religion. Hackers and DDoSers, on the other hand, are well aware of the enemy and that’s why recently an attacker going by the handle of ”Mons” conducted a series of DDoS attacks using NetStresser tool just a couple of days ago.

The reason for targeting these sites was to protest against the sudden increase of terrorist attacks in France and Middle Eastern countries. In a conversation with HackRead, Mons said that he also got assistance from the owner of BangStresser, the famous DDoSing tool which was allegedly used to shut down BBC’s servers and Donald Trump’s website in one of the largest DDoS attacks ever. However, the attack on pro-ISIS websites varied from 50 Gbps to 460 Gbps.

Mons further stated that ”We worked together to take down several ISIS websites. This is for obvious reasons. We want to help in any way we can to weaken their influence that threatens and, to some length, literally destroys our very democracy and human rights. Especially after the recent attacks in France and Arabic countries, our wrath has grown. This war needs to be fought on many fronts, and we try to cover one of them.”

Here is a screenshot showing the list of targeted websites along with tweets that show earlier attacks on pro-ISIS sites. 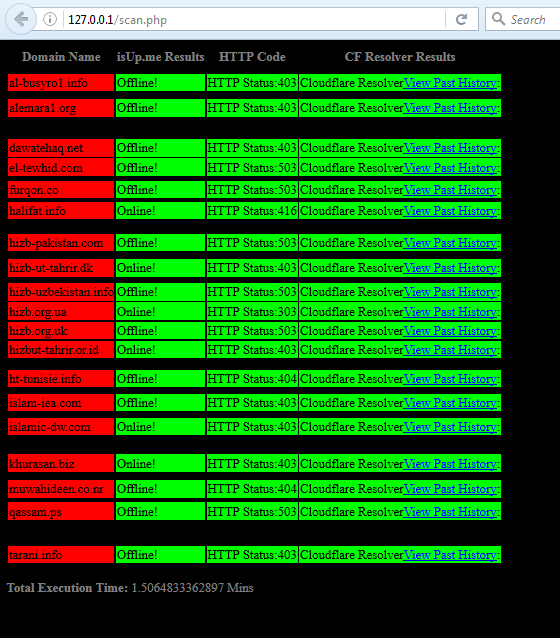 Upon checking the history on some targeted sites we can confirm the sites were spreading violent content along with terrorist ideology however at the time of publishing this article some sites were restored while some were listed for sale.

This is not the first time when attackers have targeted pro-ISIS platforms. In the past, Anonymous did not only conduct cyber attacks but also exposed companies hosting those sites — Anonymous had also blamed CloudFlare for protecting terrorists’ websites from DDoS attacks but the company had denied the allegations.