That Weekend-Long DDoS Attack On Blizzard Is Over 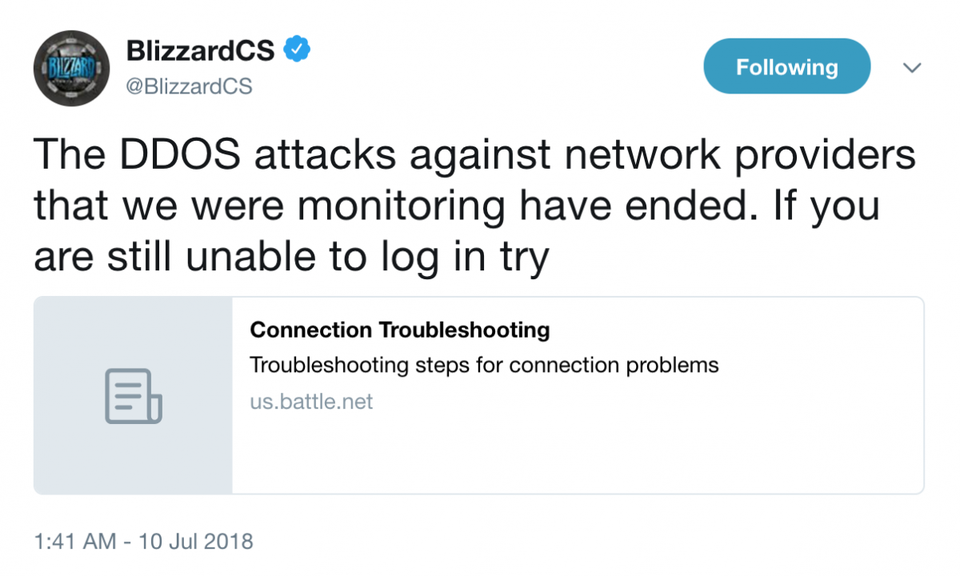 The attacks caused lag for some players and prevented others from logging in.

Blizzard Entertainment customer service announced early this morning that the denial-of-service attacks that had been plaguing its games since the weekend were finally over.

The attacks have been running off and on since Sunday, causing severe lag for some players and preventing others from logging in at all. The problem affected players of Overwatch, Heroes of the Storm, World of Warcraft and other Blizzard games.

“The DDOS attacks against network providers that we were monitoring have ended,” the Tweet read. Like others in a string before it, it suggested that the attack was actually on the servers and providers that run Blizzard’s Battle.net online services, not the company itself. Players from different parts of the country reported dramatically different experiences during the height of the attacks.

In a distributed denial of service attack (DDoS), computers and computerized devices (including potentially that networked printer of yours, or other compromised Internet of Things gadgets) flood servers with requests for information, bringing normal operations to a standstill.

Just because this series of attacks has ended doesn’t mean that another isn’t waiting in the wings, however. Typically such attacks don’t last as long (or, alternatively, aren’t repeated as frequently) as this one has been.

Perhaps it was a protest against the cute hamster-in-a-ball hero release of Wrecking Ball in Overwatch — am I the only one that he reminds of Rhino the hamster from Bolt? — or a wind-up for next month’s new Battle for Azeroth expansion release for World of Warcraft.